The opinions expressed are mine and do not reflect the positions of the Peace Corps or the US government.

Here it is, the famous, the only, the familiar, yes, The Look: 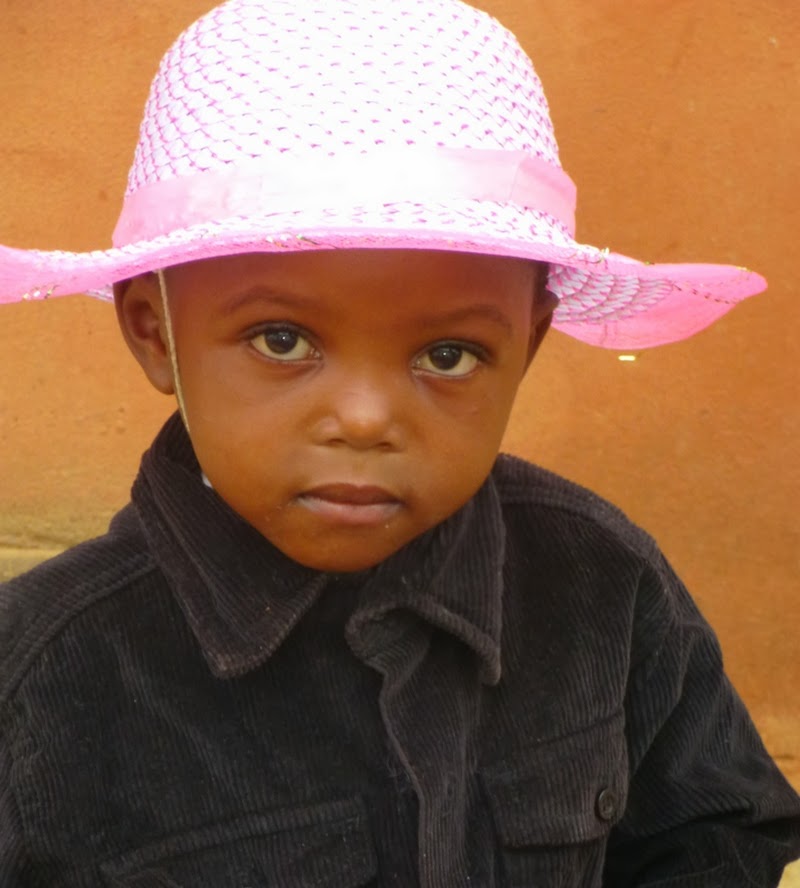 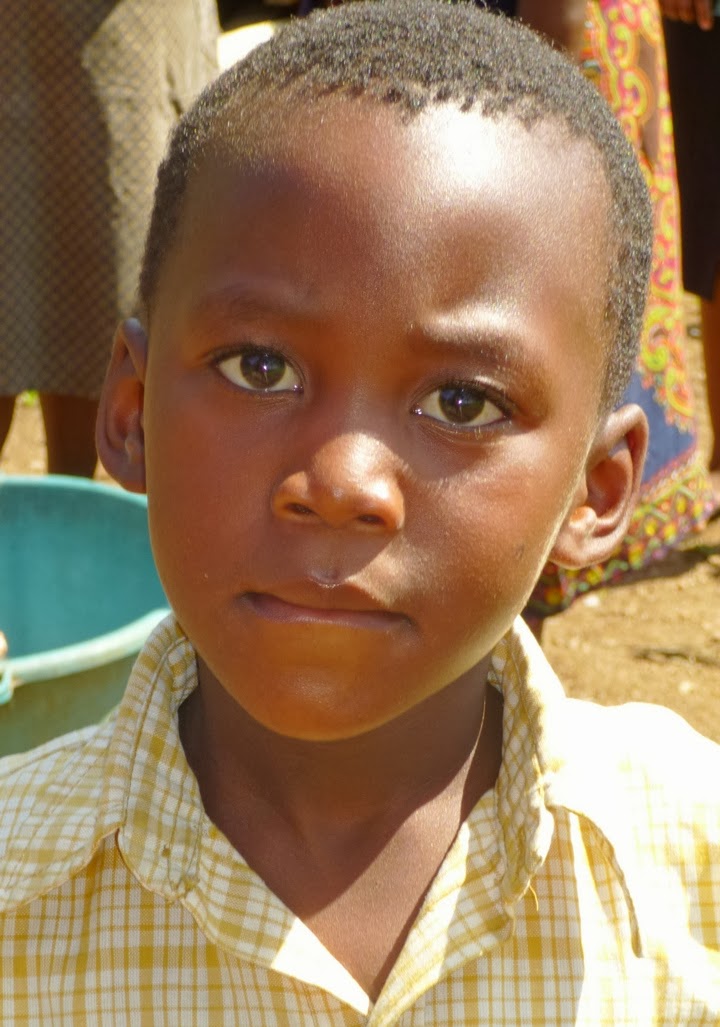 The Food Conspiracy Lives! People save money together all year, and at Christmas time they buy bulk and divide up what they buy... 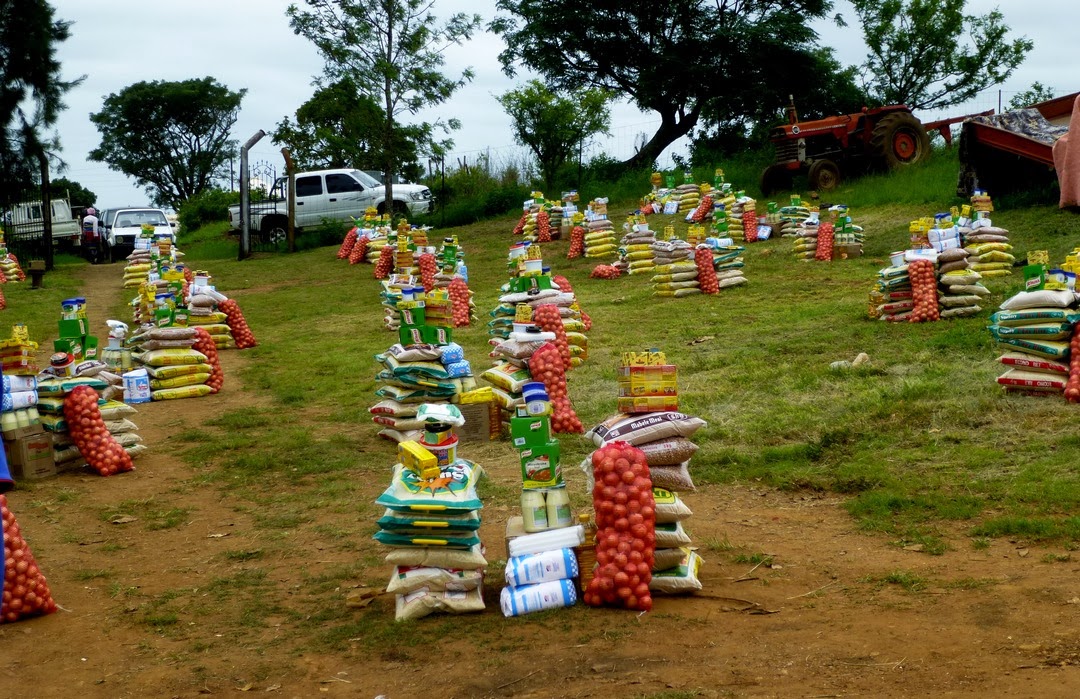 Including chicken. Make that chickens. Live. Chickens to go. 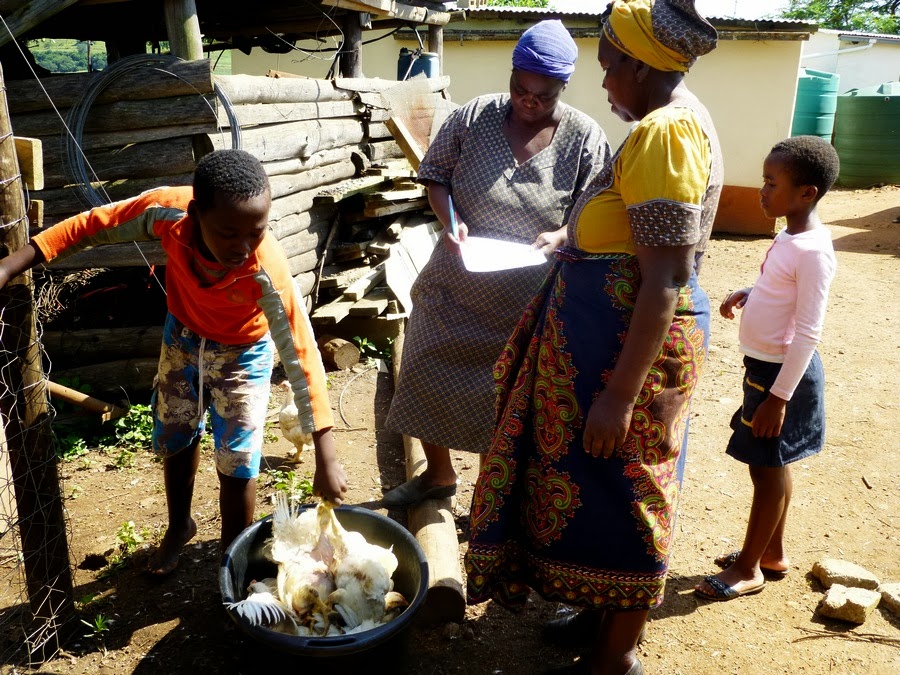 Remember the pictures of the church roof in the trees? The wooden church was leveled, so they will rebuild with cement blocks. Sunday morning found these young me down by the riverside, making those blocks. 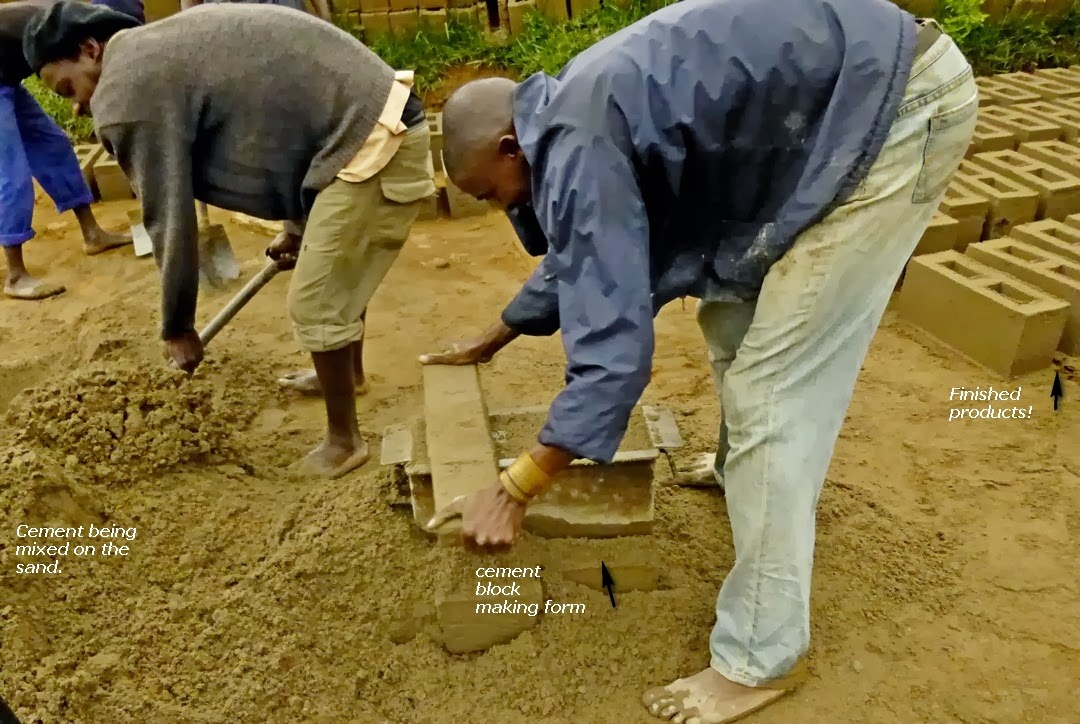 Lots and lots of those blocks. 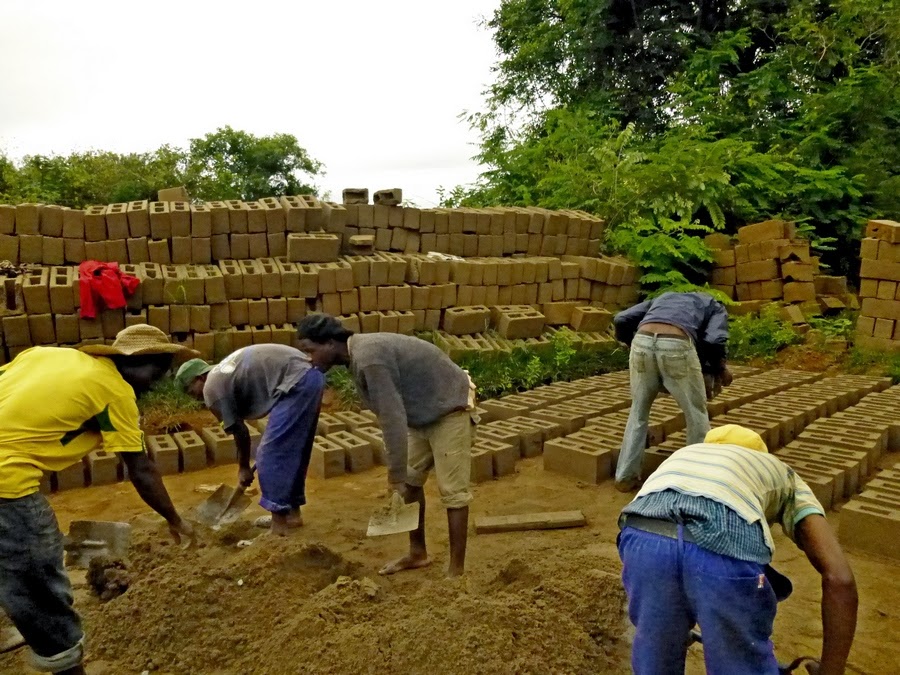 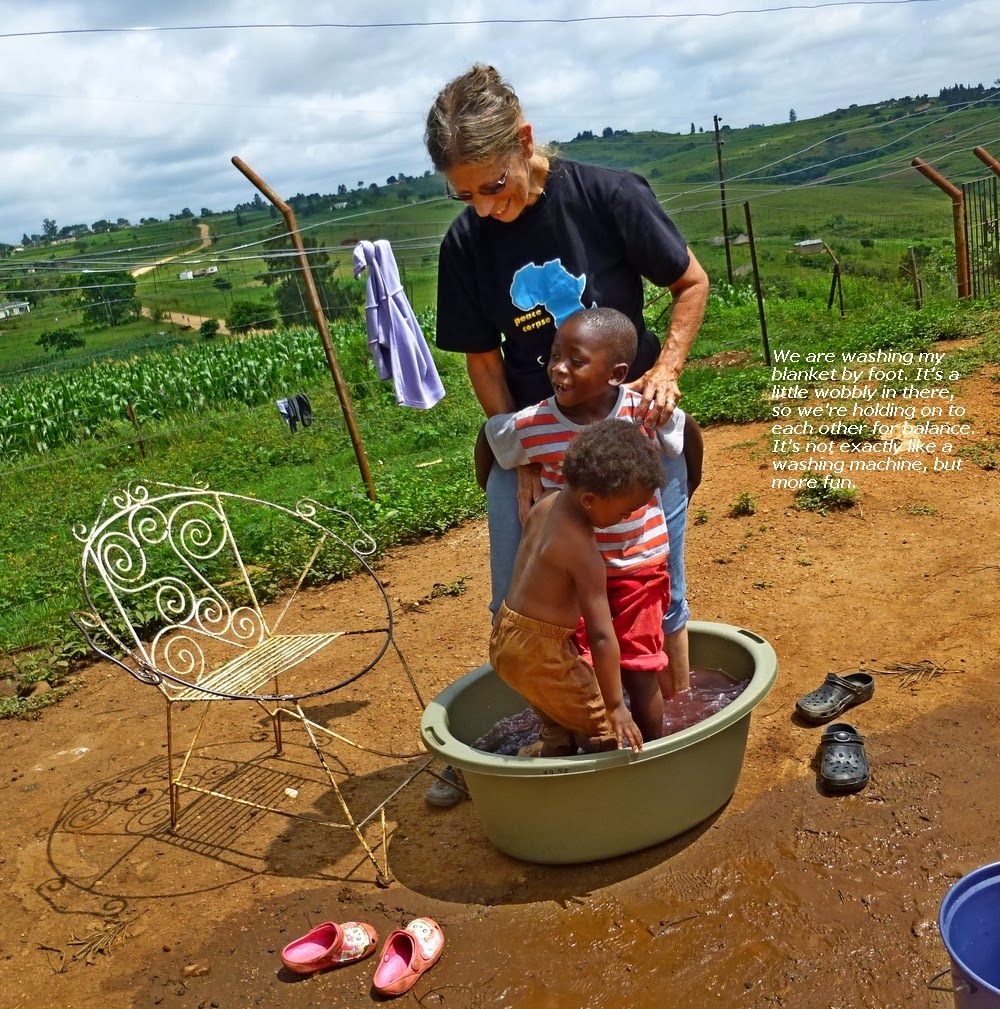 Not all of the work is hard... Nomile, Beke and I were washing my blanket, holding onto each other because the blanket made wobbly footing. And laughing a lot, too.

The hike on Boxing Day was so incredible! We were near Piggs Peak, looking into South Africa. We crossed this river on the hike up the mountain. There's a place near my homestead that has muddier water but similar rock formations. Gorgeous. Soda speak. 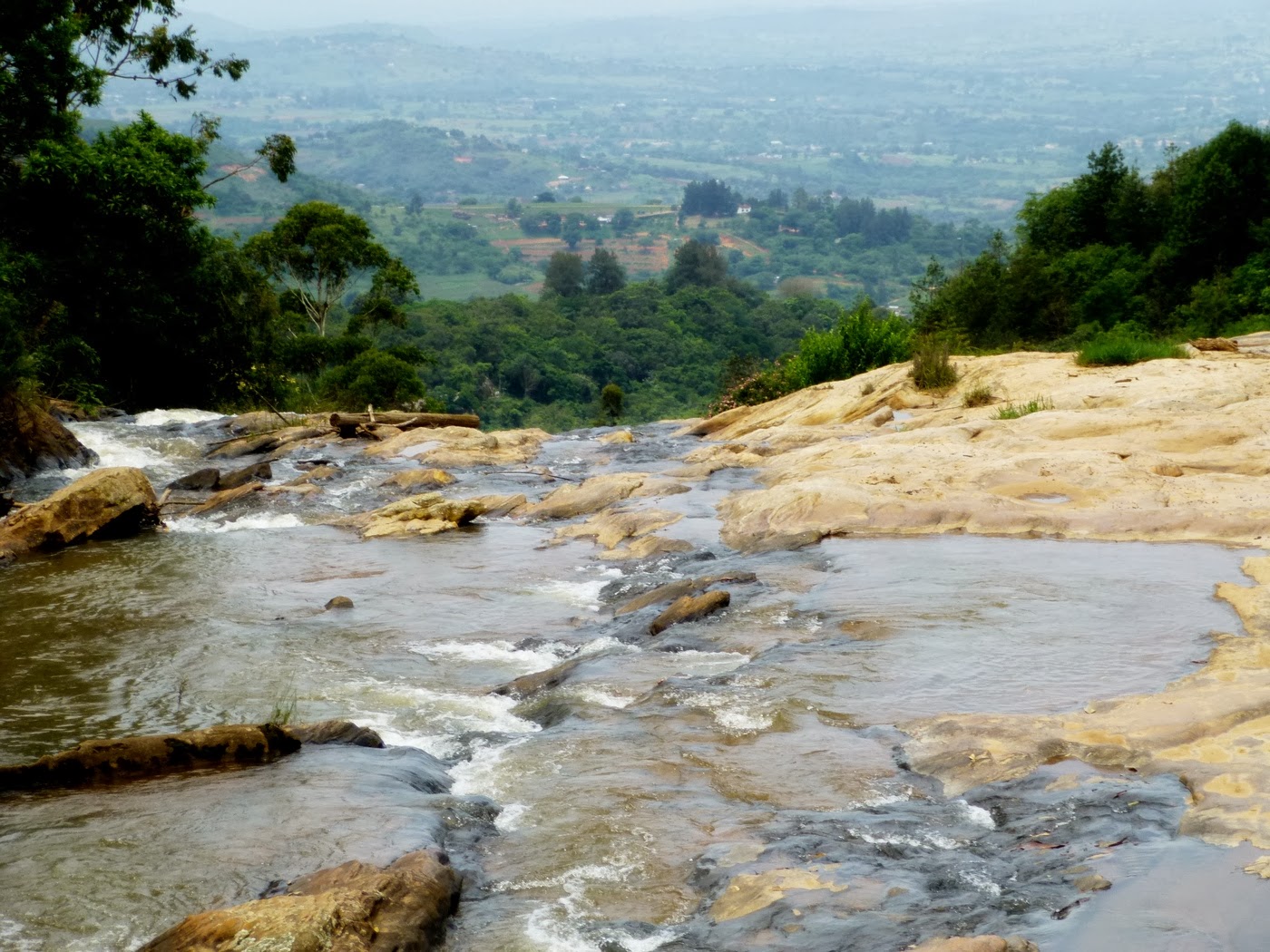 We hiked up to the top of this ridge 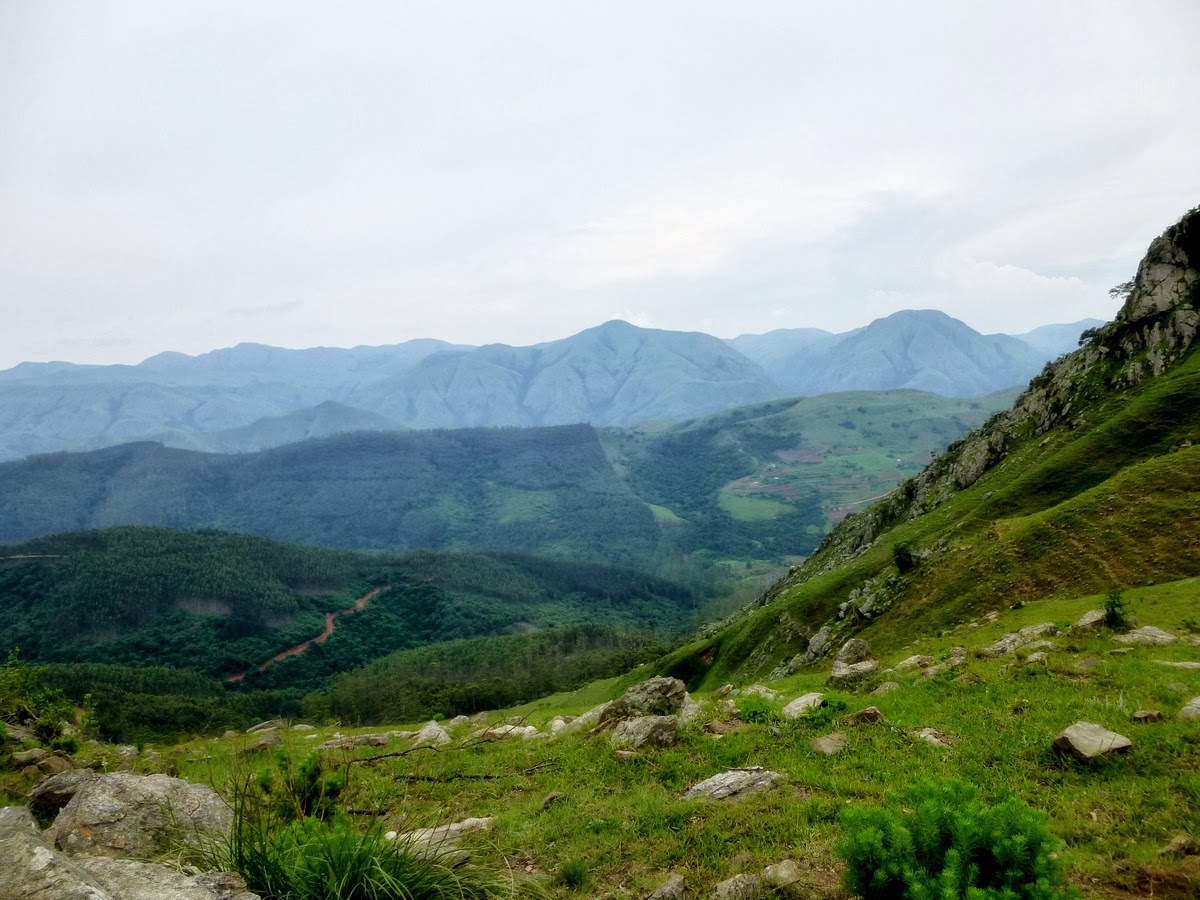 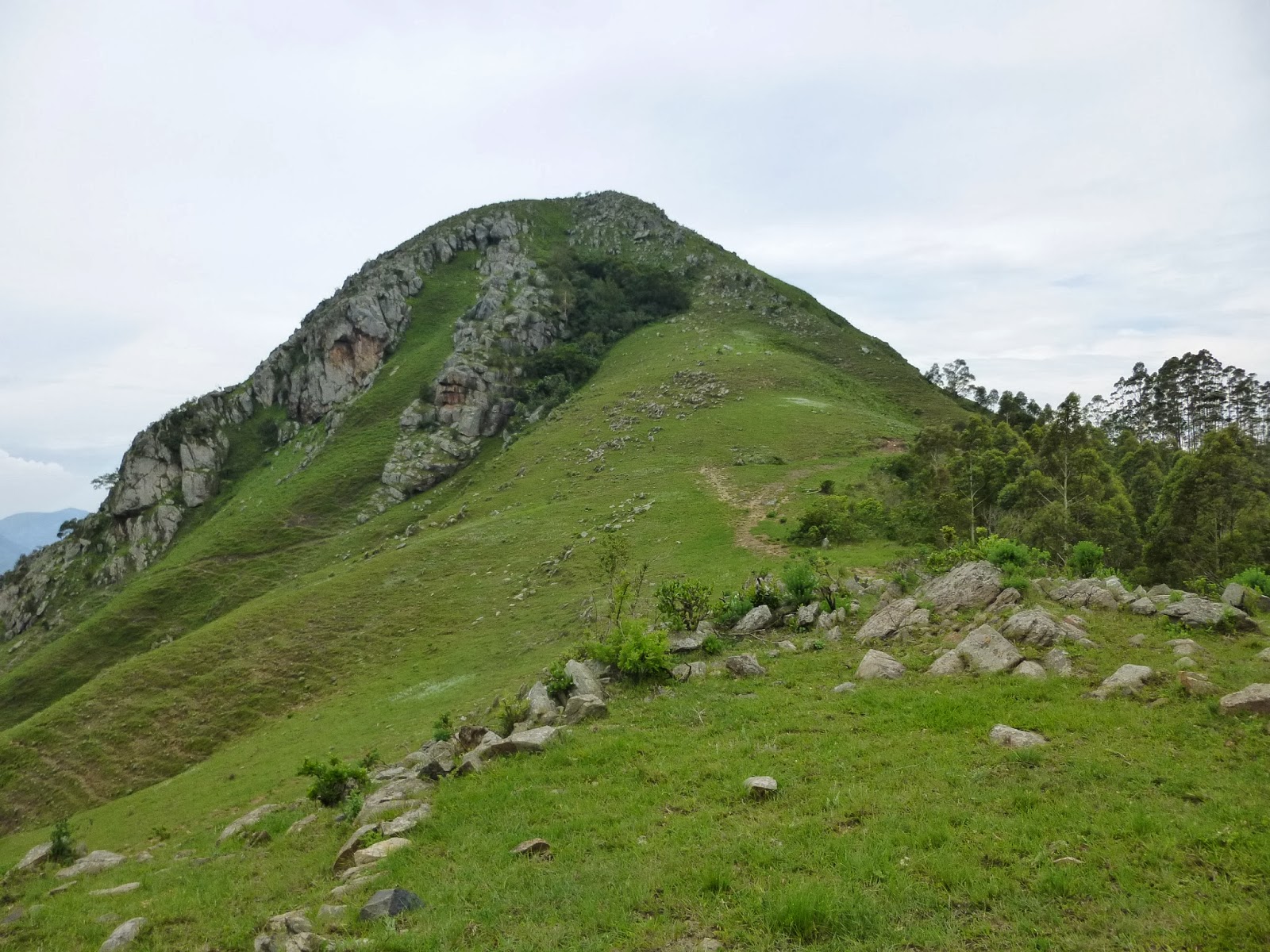 Rewards at the top: 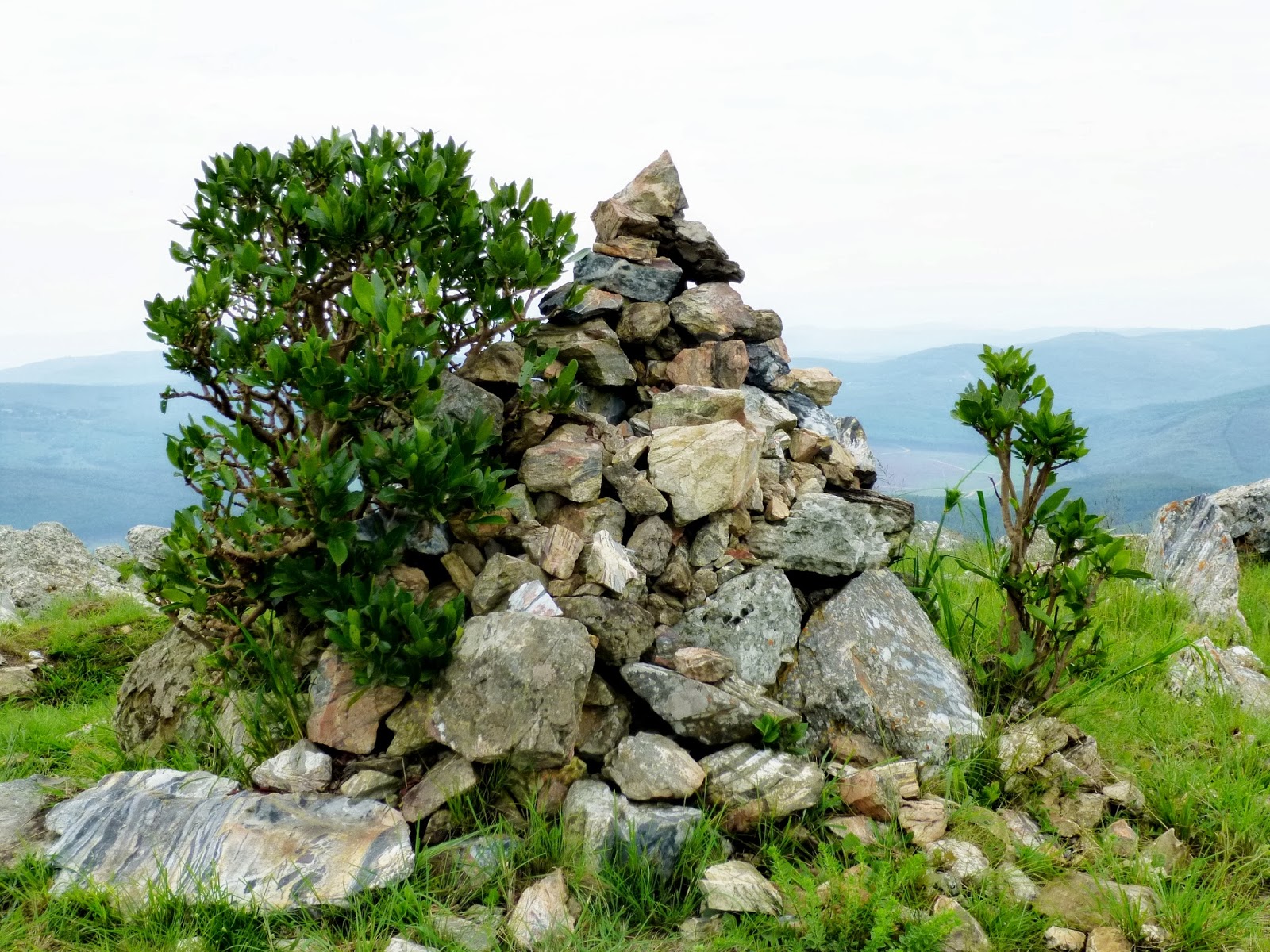 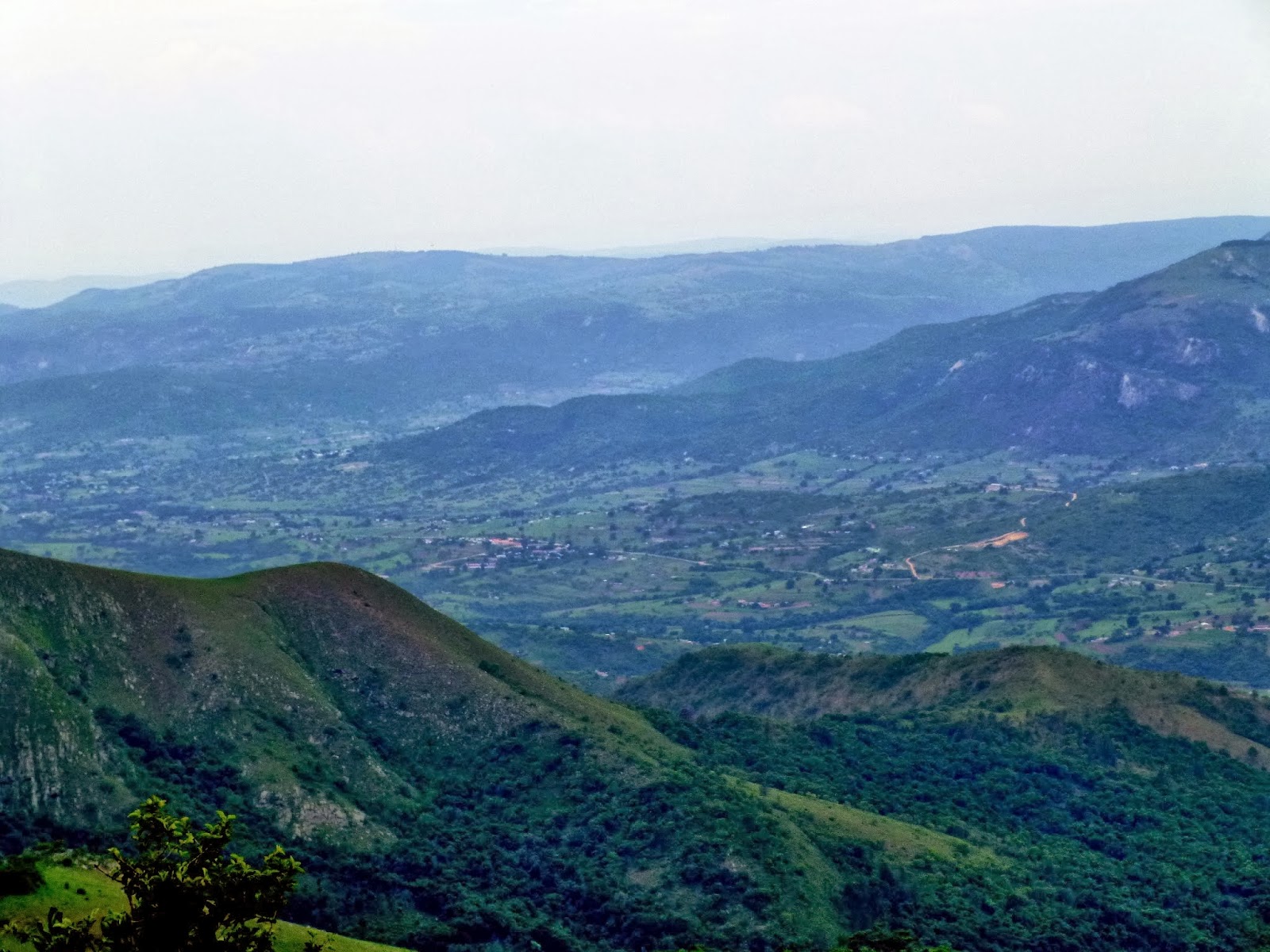 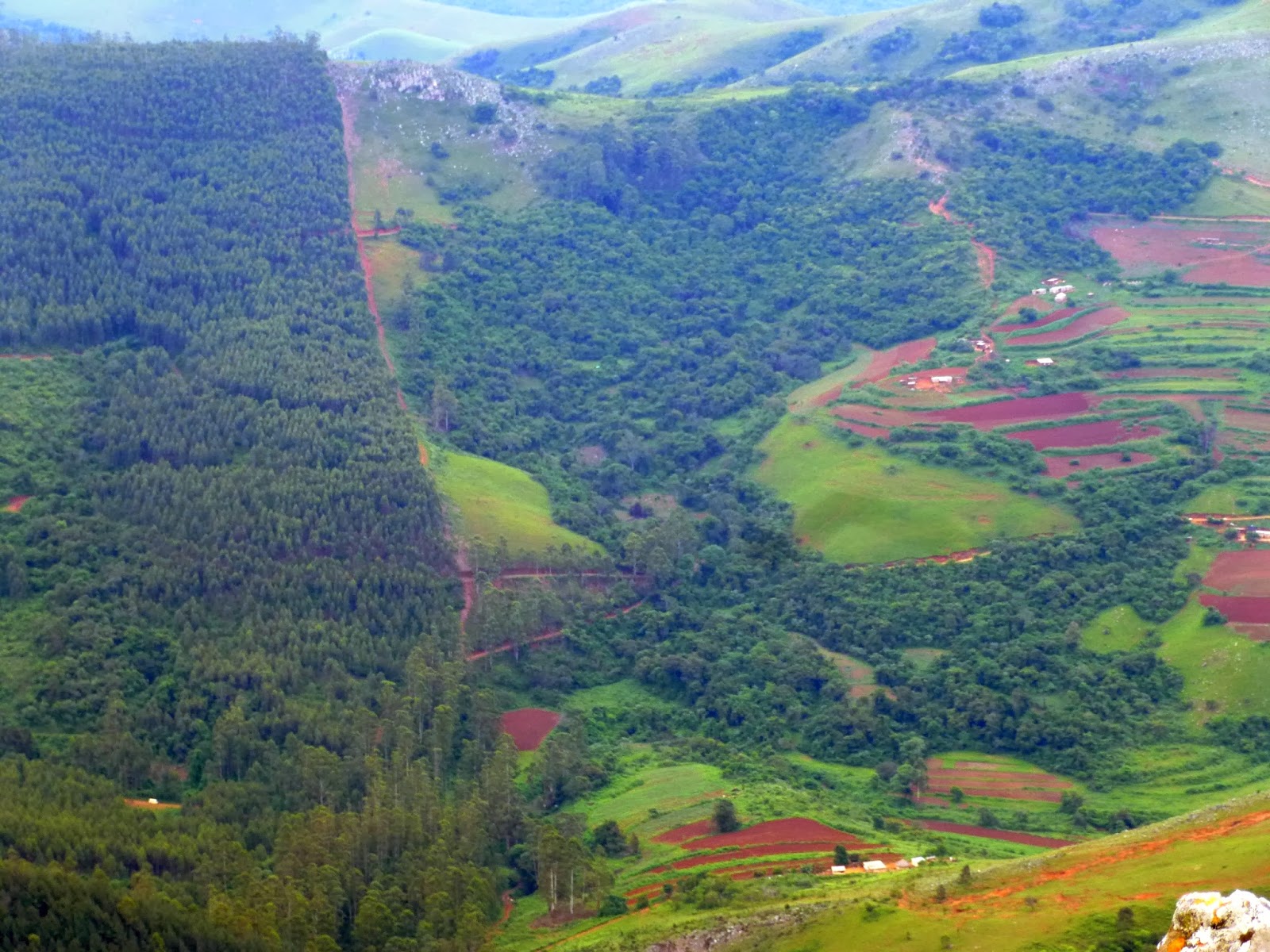 January 27, 2014
At the Peace Corps Office so am experimenting - can I get this to load? I will do another post of pictures. For now - Just processing...

January 22, 214It's the difference between knowing and experiencing. And I can't really define how it gets from the first to the second. But I know that making a difference, once person at a time, is what the Peace Corps is all about. And somehow, that knowledge  is morphing into experience. As experience, it somehow becomes a part of me in - a wholistic? way? Not sure of the word. It becomes a part of who I am. Mind/body combined.I know my expectations are not going to match what really happens. That the people here need to guide what happens and I'll put my energy where others put theirs. I may end up putting much more time and energy into the library than the career center. I may wind up creating a resource center at the umphakhatsi rather than a career center at the high school. There may not be workshops - rather informal gatherings to learn specific skills. My successes may be because of the stumble technique, like helping Simphiwe get into St. Michael's, or tutoring youth who come to me, rather than something more concrete. My best accomplishments may be mentoring a few, who will pass along what is learned. I just don't know. And I think that's okay.I keep trying to get my mind around what I 'm doing - and it won't go there. Guess it's that my worth is not in the projects I do or don't do, but in the connections I make along the way. The projects are an excuse to be here to do my "real" work.from email jan 4 2014It's been a time for introspection - for finding my balance, searching for "meaning in life", discovering my place in the scheme of the Universe. The lessons have been less than subtle - in fact, kind of slamming me in the face. All in all, I think this was a good decision, but that doesn't mean I don't have lots of doubts. sometimes I count the days left on my way to the latrine, or doing dishes with water I've hauled, or washing myself in a basin <g>. The physical realities are harsh and unavoidable. The warmth of the people and the opportunity to hang out with little kids is irreplaceable. The country is beautiful and full of surprises.Jan 23Scene... waiting for my ride to town. hot day. sitting in the shade on a slope above the road. hear a slapping sound. a dozen or so cattle strolling down the road. behind them, a young man with an umbrella for shade follows them, cracking a whip into the road in some complex rhythm all his own. we wave, and when he smiles, I realize it's Mbalekelwa and that cattle he's driving live here.and on another note entirely, for those who remember, 45 years today...January 24I was cleaning up papers and discovered I've been writing some poetry.Amazing howwe thinka better lifemeansElsewhereNo matter where     here         is.But every there,     every where           holdsHerewhere dreamsmay find us.~1/9/14Your artist's eyeNoticesthe white space:     What is not      what is no longerObserves     changeAppreciates     clear sight.~1/9/14  Africaand finally, written last spring. Hard, in the midst of summer to remember how it felt, but since most of you readers are looking forward to spring:Drum riffsof rainserenade us.Parched earthruns soupy brownKids surroundthe lidlala's cookfiretossing an occasional cobonto the coalsunder the littlelibhoda holding dinner,Sky darkens into duskthunder percussionblends with soft laughter.October.springtime inSwaziland.~10/18/13
Posted by Michele Templer at 2:03 PM 1 comment:

My father, had he lived, would have been 98 today. Dad, my illegitimate father (his description, not mine, though I love it) will be 100 on February 2. Time. A cultural concept, I think - the way we view it, not the fact that it is.

I am trying to - not sure of what the words are. I've been told Swazis don't pay attention to time - that they are often late, and that's just how it is. Seems to be true a lot of the time (pun intended). For me it means changing how I perceive. A long, long time ago I learned that "It doesn't matter." That is, it doesn't matter if I'm here or elsewhere, wherever I am is a good place to be, and things will happen here. I seem to be relearning this lesson when it takes 5 - 6 hours to go the 40 miles round trip to town and back. Or to have work mostly stop for the 6 weeks of holidays. I focus on building relationships, on preparing for when work does start again. But it often feels as though I can't get there from here because before I start I have so many things that must be done.

We're human beings, not humans doing, so goes the now-trite saying. Living it is a different story. A woman who returned to the states before the end of her 2 years wrote that she wished she had learned to embrace rather than to cope. Oh. Yes. Whatever we focus on, whatever we feed, grows. So what am I feeding? The beauty around me, the warmth of the children's laughter, the sweet birdsong from my roof? The steps forward that seem to be baby steps, but are still going forward? Or some fanciful idea that if I were just elsewhere it would be so much easier? Another volunteer, early on, said we all have things that are easy and that are hard - and it's different things for each of us. All these lessons are so true at home as well as here. Maybe it's just that here there's time to notice, examine, process them.

Posted by Maggie Lynch at 8:31 PM No comments:

Michele's computer is not connecting well, so I'm posting for her.

Holidays are really hard - they're the time our culture says we should be with friends and family whether we call this time Christmas, Channukah, Winter Solstice or Moslem, Buddhist, Shinto or other holidays that celebrate the turning of the seasons and the lengthening of days once again. Even though here it's summer solstice, the need to connect is strong. Along with that is the realization that I live here - so what I'm doing with my life is lots more than just being a Peace Corps volunteer. And that means... I need to figure out what that means.

For one thing, I need to get out of the fishbowl occasionally. I will post a picture of "the look" - the way little kids, too young to hide it, stare at me. And stare. And stare. I have my own opinions about what it means - and I'll be interested to see if anyone posts comments about what s/he thinks is going on behind those eyes when I get a chance to post a couple of pictures of it. Right now I'm having some technical difficulties, so pictures aren't happening yet.

For Christmas I did get out of the fishbowl - spent it with a bunch of other volunteers. No "looks",  I could understand all of the conversations, the food was outstanding, and we watched silly movies. And we went on 2 nice walks and a bonafide hike, up to a ridge and then up an outcropping whence we could see the mountains of South Africa and a great sweep of Swaziland spreading out below and before us. It filled my soul in a way I'd not realized was empty.

So today, while the family was at church, I walked down to the river - about half an hour away. I couldn't get my feet wet (there's a parasite that lives in the water), but the sound was wonderful, and downstream a little ways there's a small drop. The rocks are granite with some kind of intrusion, and someone had been there and lit a candle. The melted wax and a trace of energy remained. I listened to the river sing and threw twigs in the water to see what the currents were doing. The weight of the twigs made a big difference in whether they made it out of the eddies or not. Interesting.

On the way back, the churches were getting out. From one, the women were wearing white, and some walked down the road, greeting me, while others followed a brown path through a green hillside, winding around a small rise and out of sight. They are beautiful. Then a young woman lugging a large and evidently heavy duffle bag walked towards me. Her hair was braided and her dress was fine. Her very high heels made walking on that uneven dirt road most difficult, judging by the way she teetered along. Made me angry (again) at mass media that defines beauty for women in such unrealistic ways. She's not the first woman I've seen in heels. It seems so - unnecessary? dangerous? restrictive? all of the above? Even here, in rural areas, women are bound by some made up definitions of what beauty means...

There are so many differences, though. Women here can sit up straight, legs outstretched in front of them (as Make is in the picture from July or August) with no back support and be comfortable. When they bend over, they bend from the waist with such grace that you'd think they were all yoga masters. Because they carry weight on their heads, their posture and balance make those of us slumpers envious. And they seem much less self-conscious about their body images, though I don't know if that's true.

These blog thoughts are so scattered. I just don't want to forget the things I'm observing and learning. Already I take so much for granted - like the bomake dresses the women wear, the amazing hairstyles, the muddy roads and muddier rivers, the green rolling hillsides and the role of children. Thanks for choosing to read and wander this land with me.
Posted by Maggie Lynch at 8:30 PM 1 comment: